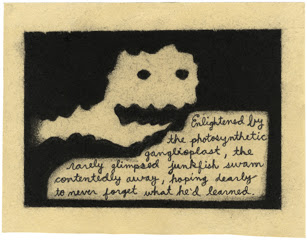 In the longest of the cartoon sequences, Herr Doktor Zweinzahne and the Foundation – set forth in dusty black charcoal on buff paper, as one might find behind a broken glass frame in a cobwebbed attic – an aging archeologist seeking ever more exotic subjects to justify academic grants seems to turn into one such subject himself, becoming hopelessly addled and compromising both his funding and his reputation. The archness of D’Agostino’s purposefully stilted verbalization and the simple eeriness of his figures are amusing and obtuse, leaving the viewer to wonder if she is being played, just as an ambitious scientist who had hit a dead end might try to con his customary benefactors. The stories culminate in the creation of a three-dimensional version of the paint spatter, mounted on a wire set in a wooden block–as if the cartoon character, now fully realized in the artist’s mind, has jumped off the wooden floor. The artist’s cheerfully decadent, baroque sensibilities brush up against the swaggering irreverence of 1970s underground comics and Hunter Thompson’s gonzo journalism. The paintings, leveraging the solemnity of vertical line and romantic landscape, hover deftly between the referential and the abstract – much as the narratives are poised, quite intentionally, between scholarly fatuity and sardonic wisecrack.

These days reality seems to be king, from unscripted TV shows and internet exhibitionism to installations featuring consumer products and relational aesthetics. With soul, wit, and virtuosity, Paul D’Agostino resurrects what seems to have gone missing in contemporary art practice: a vivid imagination.

–Written in collaboration with Jonathan Stevenson

2 thoughts on “Paul D’Agostino: Fear and Loathing in Purgatory”