At his third solo show at Luhring Augustine, Josh Smith presents paintings, collages, and crudely constructed, portable platforms that feature hanging paintings of his name, lit by clamp lamps. In the wall pieces, he has continued to surround his name with abstractions of fish, leaves, skeletons and insects, purportedly choosing these images arbitrarily, so that he can “take the act of painting beyond aesthetics” in “his ongoing exploration of abstraction.” Yet it seems odd to contend that the process transcends aesthetics, when its overt and immediate visual effect is to root each piece more firmly in the formalist camp.

Even assuming the individual objects depicted are arbitrary in the narrow sense of being substantively meaningless to the artist (itself a dubious proposition), each individual decision Smith makes would still have to be at least intuitively based on aesthetic considerations – and all the more heavily if meaning were somehow taken out of the artistic equation. After describing Smith’s process, which includes printing old imagery and incorporating the prints in new work, the gallery’s statement declares that “collectively, they represent an exhaustive exploration of technical and compositional possibilities” – formalist language if ever I heard it. I’m unconvinced that Smith’s imagery is arbitrary or that his subject is abstraction. I think his subject is denial – and that works for me.

1 thought on “Josh Smith: Paints better than he thinks” 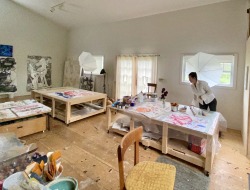 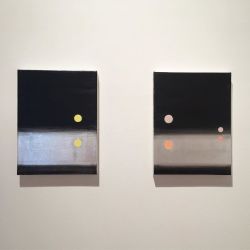 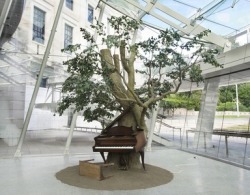